9 Benefits of Having Orgasm

An orgasm is what every woman hopes to achieve as the climax to her sexual satisfaction. This is a normal response to sexual stimulation for a woman.

While it is something that every woman wants, it is not always achieved every time a woman as sexual relations. For this reason, it is important to understand what can help a woman to orgasm during sex.

Orgasms are actually a very interesting topic and here are ten interesting facts about orgasms that you probably didn’t know that will give you a better understanding of orgasms. 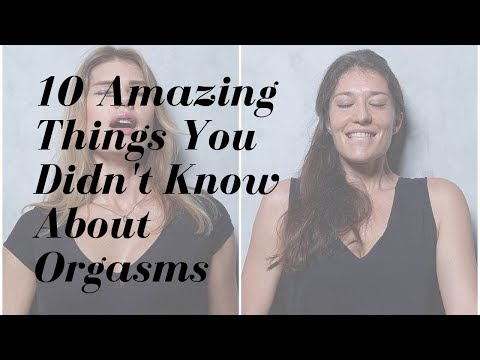 1. It is Sometimes Difficult to Achieve Orgasm

Many women find it difficult to reach orgasm and most women will have had sex without reaching an orgasm at some point in their lives. Unfortunately, there are even women who have never succeeded in climaxing during sexual relations with their partner.

Spending more time on this before penetration can significantly improve a woman’s chance of climaxing during sex. If a woman is still having difficulty, then there are medications available that can help. You must seek the advice of a doctor before taking these.

2. Condoms Do Not Prevent a Woman from Having an Orgasm

Some women mistakenly believe that a condom will prevent them from reaching an orgasm and this makes them reluctant to use condoms. This is not true as women are just as likely to have an orgasm with a condom as without.

Using condoms is the best method of preventing the transmission of many sexually transmitted infections and it is also an effective birth control method. Therefore, it is important to wear condoms for safe and enjoyable sex.

3. An Orgasm Can Help to Relieve Pain

If you have a headache, your instinct is probably to lie down in bed and get a sleep. However, sleeping is not the best way you can spend your time in bed getting over your headache. Studies have proven that orgasms are a fantastic form of natural pain relief.

This is because an orgasm causes the body to release oxytocin. It is not just headaches that orgasms can help as they also provide pain relief for post-surgery pain, arthritic pain, and even the pain of childbirth. The pain relief is relatively short-lived as it will usually help for between eight and ten minutes.

4. Orgasms Can Improve with Age

People may assume that your sex life is something that deteriorates with age and that the older you get, the less likely it is you will experience an orgasm. The opposite of this is true as evidence shows that orgasms get better and increase in frequency with age.

Researched proved this by comparing the responses of different age groups that took part in a sex survey. While only 61% of women in the 18 to 24 category achieved an orgasm the last time they had sex, 65% of women aged 30 to 39 did.

Things are even better for those in their 40s and 50s as 65% of them reached orgasm during their last sexual encounter.

5. Finding the G-spot is Important

Another important part is the G-spot, which is a sensitive point inside the vagina that has a slightly rougher texture than the rest of the vagina.

The exact location can vary from one woman to the next. Finding the G-spot can increase your chances of an orgasm. This is something you can work on alone or with your partner,

6. Trying Something New is Good

‘Variety is the spice of life’ is a well known saying and is an ethos you can apply to your sex life. If you are struggling to reach an orgasm, then trying something new can help.

Changing your foreplay routine, including oral sex, and trying new positions are just some of the ways you can make positive changes to improve your sexual fulfillment.

7. It Can Take time to Reach Orgasm

How long it takes to reach orgasm varies between women. It can also differ from one sexual encounter to the next. While some women can reach orgasm within minutes, others may take over an hour. The average length of time it takes for a woman to reach orgasm is around 20 minutes.

8. Self-Esteem and Orgasms Are Connected

If you reach orgasm and the quality of an orgasm are linked to your self-esteem. Feeling confident about your body is the first step to sexual fulfillment. Worrying about what your vagina looks like during sex is a sure way to delay or prevent an orgasm.

Accepting your body and feeling relaxed will increase your chances of an orgasm. All doctors will confirm that every woman’s genitals are unique to them and what they look like is not something about which you should feel concerned.

9. Faking It is Pointless

As many as 80% of women have admitted that they have faked an orgasm at least once. This is usually as they feel that not having an orgasm will make their partner feel like a failure and ruin their confidence in bed. However, faking an orgasm is doing nobody any favors.

By faking it, your partner will not learn what arouses you and you will continue to have unsatisfactory sex. It is better to tell them or guide them with your hand to show them what you like. This is a way of learning together how you can both achieve sexual satisfaction.

Some women can achieve spontaneous orgasms or have orgasms that are caused by vibrations of moving vehicles. This is quite a rare phenomenon, so if it is not already happening to you, it is unlikely this is something you will experience in the future.

This site uses Akismet to reduce spam. Learn how your comment data is processed.

What is Vaginal Sex?

Types of Penis: Size, Shapes and Other Juicy Details

What Is Oral Sex?

10 Tips to Having the Best Casual Sex Experience

Growers Vs Showers: Everything You Need to Know

What is Child Pornography?

How Long Should Sex Last?

The Future of Sex Toys

Who is a Bisexual (Bisexuality)?

10 Tips to Having the Best Casual Sex Experience